The ribs are done!  Well, they’re maybe done.  I’m not totally sure about them but I think it is hard to make my mind up on them or alter them again until I get more of the parts done.

Below is the current progress of all of the parts I’ve done so far. I’m currently sewing up the shoulder bones, scapula and clavicle. I’m not sure on the scapula but once again I’ll see how it looks in context. 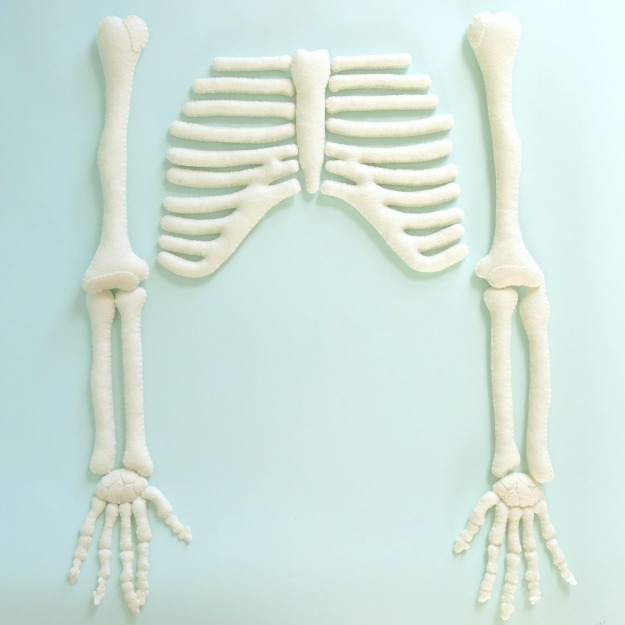 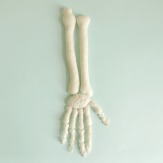 Over the last week and a bit I’ve tackled the arms of the skeleton. The arms were easier to design and cut than the hands as they’re nice and big.  They took a bit of time to sew (2 hours plus) and add stuffing to. I’m happy with how these have turned out.

I won’t be joining these together with stitches just yet as the bones will be too hard to store when they are all together.

This year I was looking for a 365 day project to challenge myself.  I almost chose 365 days of horror movies but though I might be a wreck after just a month, not to mention that some days I just couldn’t fit in a horror movie or find one to watch.  Horror movies isn’t much of a project either.  My partner always has good ideas and suggested I make a skeleton from felt. He didn’t think horror was a good idea as he doesn’t enjoy the genre.

I began the Skeleton around the start of the year with some sketches.  It’s already been a struggle getting the sizes right and finding references for parts.  Felt is a huge challenge with really tiny details as it is hard to cut small and make matching parts so small. I started with the hands and had to get creative with the scissors when my patterns were just too small to cut around. The bulk of the hands were done across about 4 hours but about another 2 or 3 hours needs to be added on top of that just sewing bits here and there and re-doing bits that went awry.

The Good Hand.  The second one worked out way better than the first.

Both hands.  One is very floppy (right) the other very stiff (left).

As I was making the phalanges I realised that making individual carpals was going to be bloody challenging as I would never get the sizes right so I decided to go with a solid piece under with details on top.  Artistic licence has come into play here as some parts were so tiny and the felt was not cooperating and I’ve heard that sometimes done is better that perfect.

All up I’m pretty happy with how they turned out but I think the stiff hand might need a re-sew. I plan to do the arms next.  Radius and Ulna.

Maybe I should try the horror thing out. Watch a month worth of Horror movies?  Maybe I could do a month of horror movies and TV shows (American Horror Story is in my Netflix list) and see how I go.