I’ve wanted to learn taxidermy since I was small, late primary school age, probably about 10.  When I was in year 8 (the first year of high school in Australia) I said that I wanted to be a taxidermist (when asked “what do you want to be when you grow up?”) Wanting to be a taxidermist (and actually saying that) are probably not the best moves for someone just starting high school, but whatever.

I finally got a chance to try it out in one of Mickey Alice Kwapsis’ workshops when she came to Brisbane.

Very excited to try more taxidermy.  In fact I have to order some scalpels this evening. 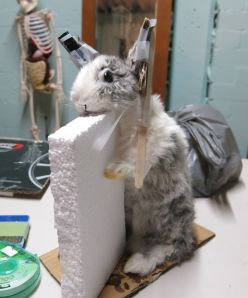 When the rabbit was first done I had to pose it

It has dried out really well but is a bit top heavy.